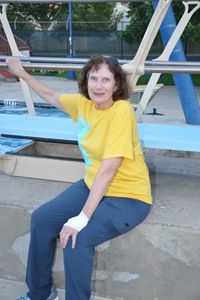 The Barracudas are pleased to welcome back Coach Jamee Stewart for her 30th year! Twice she has led the mighty ‘Cudas to the NWSC Championship back when the NWSC teams competed at one championship meet. After the NWSC restructured and the championship meet in four separate divisional meets, Jamee led the Cudas to consecutive NWSC Division I Championships from 1993 through 1997, and again in 2004, 2005 & 2006, 2008 and 2010-2012. In 2017, she led us to the Division III Championship!  Coach Jamee says that coaching the ‘Cudas is the most challenging and rewarding part of her life. And she’s had plenty of other challenges!

Coach Jamee has swum the English Channel twice, Loch Ness in Scotland, Lake St. Jean in Quebec, Canada, and from the Isle of Capri to Naples, Italy. She’s a former Masters National Champion in the butterfly and distance freestyle events, and was an AAU and TAGS champion as an age group and open swimmer. Jamee excels not only in swimming, she has extensive teaching and coaching experience.

Coach Jamee is Austin Community College’s Physical Education Department Head, a position she’s held for over 24 years. Jamee has also coached other swim teams and several high school teams, leading many to championships. In 1975, she coached the Anderson High School swim team to win the State Championship.
Coach Jamee has also taught elementary, junior high and high school P.E. She holds a BS from UT Austin and a MS in Physical Education from the University of Houston.

Coach Jamee believes that her job is to help each swimmer reach their personal best and to have fun doing it.

Click HERE to let us know you are going to miss a meet after the deadline has passed.